After finding that premature provisional scaffold loss was a major mechanism behind the failure of the ACL to heal, we sought to develop a substitute provisional scaffold that is easily implanted and capable of providing the growth factors and enzymes required to optimize fibroblast and neurovascular ingrowth.  Such a substitute scaffold would also need to withstand the physical conditions of the intra-articular environment.

Our experiments validated the hypothesis that multiple cytokines could stimulate cell proliferation, migration and collagen production in vitro; however, the improvements were modest.(1)  This led us to look for a more physiologically relevant cytokine and growth factor delivery system.  We focused on the use of platelets, since in classic studies of wound healing, platelet coagulation and platelet granule release are incipient events.

We designed and tested a strategy for delivering fresh platelets to an ACL wound using a stable carrier to see whether this would promote ACL healing that is similar to that of the MCL and other extraarticular ligaments. 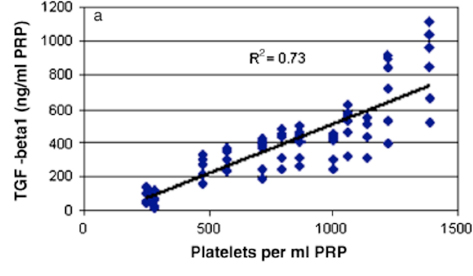 Figure 1:  Platelet number versus growth factor release. When more platelets are incorporated into a blood clot or PRP clot, more growth factors are released from that clot. For the case of TGF-b, the relationship is linear as shown here.  (Figure from Jacobson et al, Wound Repair and Regeneration, 2008, 16:370-378.) 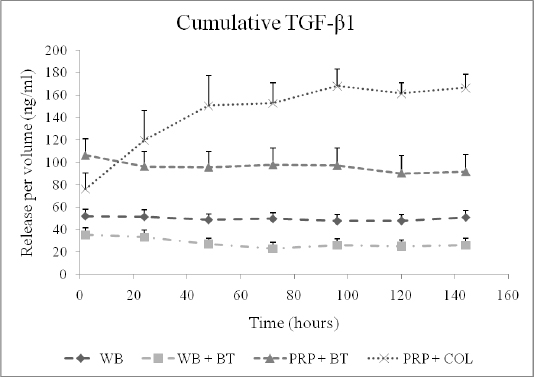 Figure 2: Cumulative TGF- β1 release over time measured in the supernatant surrounding four types of blood clots. The naturally clotting whole blood (WB), thrombin-activated whole blood (WB+BT) and thrombin-activated platelet-rich plasma (PRP+BT) clots released TGF- β1 at the two-hour time point and maintained the same level of cumulative TGF- β1 on the remaining six days. In contrast, the protein-activated platelet-rich plasma (PRP+COL) clots released a relatively small amount of TGF- β1 at the two-hour time point and showed an increase in the cumulative TGF- β1 levels in the supernatant between day one and five, after which the concentration remained constant. The shapes at each time point represent average values (n=9) of growth factor released and error bars are SEM.  (Reprinted from Harrison et al, AJSM, 2011 39:729.) 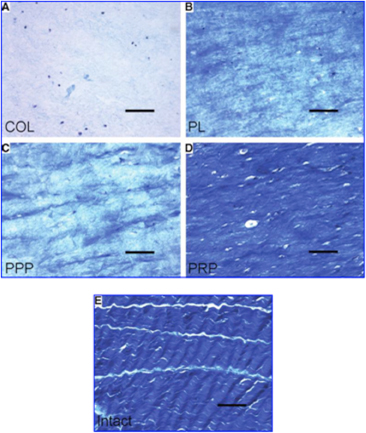 en in constructs of ACL cells and the addition of collagen only
(A),platelets only (B),plasma without platelets (C), and platelets and plasma (D).
All are compared with the intact ACL (E)  Scale bars: 100um. Note the similar intensity of staining in the intact and platelet+plasma groups. (Used with permission from Cheng et al, Tissue Engineering 16(5):1479-1489.)