In vivo animal models of ACL injury were then required to translate what we learned in the petri dish to a living organism. ACL transection models (i.e., the Pond-Nuki model) have been historically used to promote joint failure in the study of osteoarthritis.

In this application, the ligament is not repaired so that joint damage can develop post-operatively. Therefore, we needed to create and validate an ACL injury model in which the ligament injury is repaired to restore joint function and prevent joint failure. Mouse and rodent models were not suitable, since their joint size, structure, and morphology are very different from humans, as is their life expectancy. We developed a large and longer-lived preclinical model and identified clinically relevant outcome measures that are translatable to the human condition.(1;2;3-6)

Our initial in vivo experiments focused on a central defect model in which a cut is created within the ACL midsubstance and then left to heal on its own or after treatment with a protein scaffold loaded with platelets. This model allowed us to eliminate the confounding factor of joint instability on the wound physiology. We determined that these partial ACL injuries would not heal spontaneously(2)(6). We then developed and validated a histologic scoring system to grade the ligament healing response(1) and then tested the hypothesis that placement of a substitute protein scaffold could stimulate functional healing of the ACL. We found that use of a protein-based scaffold loaded with autologous platelets encouraged both biologic and mechanical healing of the central ACL defect(1;7)(5) 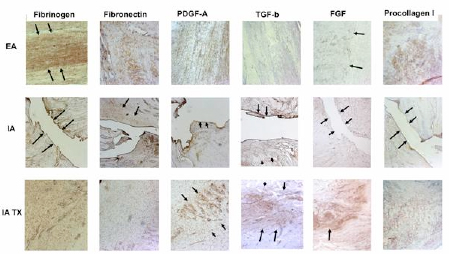 The finding that the use of our tissue engineered composite (the "protein-platelet scaffold) could stimulate healing of a central defect led us to combine the use of this scaffold with a suture repair (a “bioenhanced repair”) to treat a complete ACL tear. For the complete tear, we developed a model in the porcine knee (Fig 2) and we found that the use of a protein-platelet scaffold could stimulate functional healing following a complete ACL tear(8) (Fig 3), while use of platelets alone(9) or the protein scaffold alone(10) did not improve repair healing.  We also found that the suture technique used during the repair significantly influenced the outcomes of the repairs(11;12), but that increasing the platelet concentration above three times the normal level did not improve results(13).

Figure 2:
Stepwise demonstration of the “bioenhanced ACL repair” technique using the protein device (seen first in C where it is threaded onto sutures).  In this technique, the torn ACL tissue is preserved (A).  Small tunnels (4 mm) are drilled in the femur and tibia and an Endobutton with sutures attached to it is passed through the femoral tunnel and engaged on the proximal femoral cortex.  One set of sutures from the Endobutton is threaded through the protein scaffold, tibial tunnel and secured in place with an extracortical button (red sutures). A second set of sutures (green) from the Endobutton were tied to the Kessler suture placed in the tibial stump of the ACL (green sutures). The protein device is then saturated with 5 cc of the patient’s blood. The protein device is not load bearing, the initial strength of the repair is dependent on the sutures.  The ends of the torn ACL then grow into the protein scaffold and the ligament reunites. (Fig from Vavken et al, 28 (2012)672-680).

Figure 3:
The relationship among mechanical properties, cellularity and vascularity over the 3-month healing period for bioenhanced repair of the ACL. Cellularity of the wound site peaks at four weeks; vascular density peaks at six weeks.Yield load of the healing  ligament does not start to significantly increase until after the cellularity and vascularity peaks, at three months. (Fig from Joshi et al, AJSM, 2009.  37:2401.)

Our recent ACL repair studies in three preclinical models have demonstrated that placement of the protein device in the injury site of the ACL can stimulate biologic and mechanical healing of the ligament(14;1;2;4;5;15-18).  Our studies have shown that the use of a platelets with a protein-based scaffold, which immobilizes and activates the platelets in the injury site, releases growth factors with spatial and temporal sequences that matches their release in healing extra-articular tissues such as the MCL(1). The use of the protein device significantly improved both the yield load and stiffness of the repair tissue over the case where no scaffold was placed(4;18). When used in bioenhanced ACL repair, the yield load increased almost 100% from 200±145N to 395±110 N (mean±SD, n=6, p<0.03), and the stiffness of the repair improved 60% from 50±32 N/m to 83±15 N/m (mean±SD, n=6, p<0.02), resulting in values that are nearly equivalent to that of a graft after ACL reconstruction (the gold standard)(4).  Furthermore, in a recent randomized trial in a large animal model(19), the biomechanical outcome of bio-enhanced ACL repair was equivalent to that of ACL reconstruction (Fig 4). 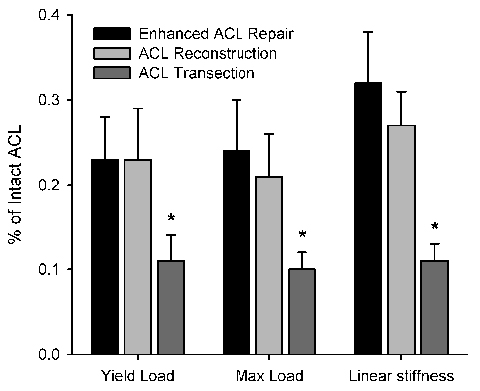 Figure 4:
Structural properties of the bio-enhanced stress-protected ACL repair (labeled as “Enhanced ACL Repair) were identical to those of ACL reconstruction with a graft in a randomized large animal study (n=8/group; p>0.60 for all parameters). 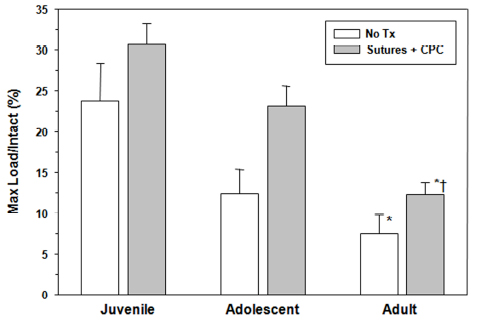