Brazelton Institute | Who Was Dr. Brazelton? 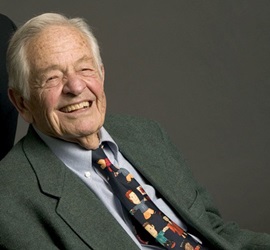 Berry Brazelton, a towering figure in pediatrics, died in 2018 at age 99. He was a leading force behind the pediatric healthcare revolution that opened doors to parents and empowered them to become active participants in their children’s care. He advised parents and health professionals from almost every discipline — and even counseled presidents — about child raising and development, and was renowned for offering guidance to parents in a way that was sympathetic and non-judgmental. But it may have been his contribution to our understanding and appreciation of the human newborn that sealed his reputation as a major figure in the field of pediatrics and child development.

While Dr. Brazelton may not have been the first researcher or clinician to realize that newborn babies were more competent than had been acknowledged, he played a central — if not the central — role in changing conventional perceptions of the newborn among researchers, practitioners, and parents around the world. He pioneered the use of the neurobehavioral newborn examination as an opportunity to support parents by integrating them into the pediatric session and using the examination as a teaching tool in a way that was strength-based and family-centered. The Neonatal Behavioral Assessment Scale (NBAS), which he developed in 1973, opened the door to a whole generation of clinicians, researchers, and parents to enable them to discover and acknowledge the human newborn as a person.

On the second anniversary of Berry Brazelton’s passing, he is remembered in the Harvard University Memorial Minute, a biographical tribute written by Leonard Rappaport, J. Kevin Nugent and Joshua Sparrow. Click here to read the full tribute.