Sickle Cell Disease (SCD) is an inherited blood disorder that leads to the production of abnormal hemoglobin. Ordinarily, the hemoglobin protein, which lives inside red blood cells, attaches to oxygen in the lungs and is carried to all parts of the body. Normal red blood cells are flexible and can move easily through blood vessels. When a person has sickle cell disease, a gene mutation distorts red blood cells into a crescent or sickle shape. These sickles can block red blood cells from passing through blood vessels and delivering oxygen to organs and tissues. Symptoms include anemia, hypertension, organ damage — along with excruciating pain.

He is the first patient to participate in a clinical trial testing a novel gene therapy approach for treating SCD. After needing monthly blood transfusions for 17 years to control his disease, he is now symptom-free. 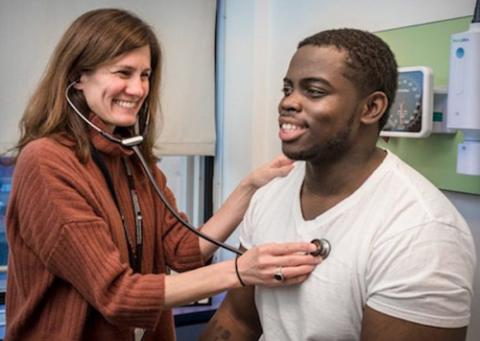 How gene therapy for SCD works

To perform gene therapy, a patient’s blood stem cells are collected and exposed to a vector containing instructions to knock down BCL11A. The patient then receives chemotherapy in a process called conditioning, likened to plowing a field to make room for new seeds. Finally, the gene-modified cells are given back via intravenous infusion.