Emergency Medicine | In The News

The 2022-23 edition of U.S. News & World Report's "Best Children's Hospitals" has been released, and we are proud to announce they named Boston Children's Hospital the #1-ranked children's hospital in the nation for the ninth consecutive year.

High-powered rare-earth magnets made of neodymium have been commercially sold as small (3- to 6-mm) recreational objects for entertainment and toys since 2009. Think Bucky Balls building sets, jewelry kits, and spinning toys. However, these magnets are 5 to 10 times more powerful than traditional ferrite magnets. Ingestion of 2 or more magnets, or a magnet with a metal object, can lead to bowel obstruction and perforation when magnets attach through bowel walls. This can lead to serious injury requiring surgery and even death.

After reports of pediatric injuries and deaths due to ingestion of these magnets, the Consumer Product Safety Commission (CPSC) initiated campaigns to limit their sales starting in 2012. In October 2014, the CPSC instituted the Safety Standard for Magnets Sets rule prohibiting the sale of these small high-powered magnet sets. Then in November 2016 this rule was legally remanded. Since that time there has been a resurgence of these magnets on the commercial market.

The objective of our study was to examine trends in U.S. emergency department (ED) visits for pediatric magnet ingestions over the time-period of the changes in these federal regulations. We found there were 1,421 ED visits from 2009-2019 for ingested magnets in the National Electronic Injury Surveillance System (NEISS) database of US injury-related ED visits. Preschool age children 0-5 years old had the highest rate of ED visits weighted rate 7.0/100,000 children 0-5 years old). ED visits increased from 2009-2012, then decreased from 2012-2016 after CPSC actions to limit sales, but then increased at higher rates from 2017-2019 after the CPSC rule was remanded.

Our study demonstrated institution of the CPSC magnet sets rule was associated with decreased ED visits for pediatric magnet ingestions and then removal of the rule was associated with increased ED visits after 2016. We concluded effective prevention of pediatric magnet ingestions can be achieved with federal industry regulations by the CPSC. We advocate that these standards for magnet sets, which can cause substantial morbidity as well as mortality, should be reinstituted given the increasing rates of magnet ingestions. 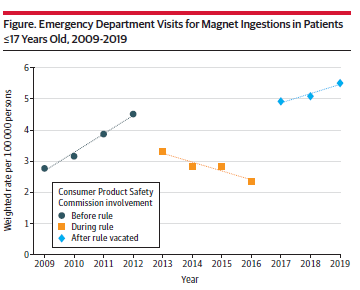