What is chronic lung disease of prematurity?

What are the risk factors for developing CLD?

Chronic lung disease may occur if your child:

What are the symptoms of chronic lung disease?

Each baby may experience different symptoms, but common symptoms include:

Lung injury and scarring, which may result in difficulty breathing and increased oxygen needs, can be caused by any of the following:

How is chronic lung disease of prematurity diagnosed?

CLD is a chronic disease and appears gradually, so your baby’s physician will consider several factors; chest x-rays may show a bubbly, sponge-like appearance in affected lungs.

How is chronic lung disease of prematurity treated?

Your baby’s physician will determine a course of treatment based on your baby’s gestational age, overall health, the extent of the disease, your baby’s tolerance for specific medications, procedures, and therapies, and your opinion or preference. Treatment may include:

Some babies with CLD require mechanical ventilators for several months. Some will continue to require oxygen even after they leave the hospital, but most can be weaned by the end of their first year.

Boston Children’s Center for Healthy Infant Lung Development (CHILD) offers a comprehensive, team-based approach to maximize the growth and development of the lungs; CHILD is staffed by an experienced team of clinicians, all with specialized training in the care of infants and toddlers with lung disease. Our unique NICU Growth and Developmental Support Programs (GraDS) track children from the time they leave the hospital until they are 3 to 4 years of age. 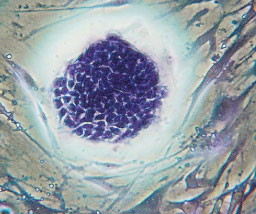 Premature babies often need to be placed on ventilators, but these life-saving machines can sometimes damage their delicate lungs. In recent experiments in mice, stem cells taken from bone marrow and injected into the blood provided partial protection: the lungs’ blood vessels were better maintained and inflammation was reduced.

Even when fluid in which the cells (known as bone marrow stromal cells) were grown was able to protect the lungs — in fact, better than the stem cells themselves. Stella Kourembanas, MD, chief of the Division of Newborn Medicine, believe this fluid, or certain proteins her lab has isolated within it, could become a future treatment to prevent preemies from developing chronic lung disease. She would also like to conduct follow-up experiments using stem cells taken from the umbilical cord, which can be obtained from infants in a less invasive manner than bone marrow cells.

Success in preventing chronic lung disease in premature newborns has been limited. Researchers in our Division of Newborn Medicine hope that an experimental approach involving stem cells will lead to a new therapy — but not in the way one might expect.

The research team, led by division chief Stella Kourembanas, MD; Muhammad Aslam, MD; and Rajiv Baveja, MD, worked with newborn mice exposed to high concentrations of oxygen to model early chronic lung disease. They harvested bone-marrow stromal cells (BMSCs), a type of stem cell that has the potential to form lung cells, from the marrow of adult mice, and injected the cells into the newborns’ bloodstream. The cells found their way to the lungs and partially protected against injury: Blood vessels were better maintained and lung inflammation was prevented.

Intriguingly, tissue studies indicated that the lungs actually retained very few of the transplanted cells, suggesting that direct physical tissue repair wasn’t how the BMSCs protected the lungs. Further experiments suggested that the cells release factors that act in a paracrine manner, stimulating the lungs to heal themselves: When fluid from cultured BMSCs (the conditioned media) was injected by itself, the mice not only had better lung vascularization and reduced inflammation than untreated mice, they also showed healthy alveolar growth — something not seen with BMSCs themselves. “Being able to use the conditioned media would be far easier and more efficacious than using the stem cells themselves,” Dr. Kourembanas says.

A protein analysis of the media further revealed two abundant factors that are being tested directly: osteopontin and macrophage colony-stimulating factor 1. In the future, Dr. Kourembanas hopes to determine exactly how these and other factors released by stem cells protect the lungs, and whether they can reverse, not just prevent, chronic lung disease. She would also like to test conditioned media derived from human umbilical cord stem cells, eliminating the need to draw blood marrow from premature newborns.

The research was published in the American Journal of Respiratory and Critical Care Medicine.

The Division of Pulmonary Medicine serves children with acute and chronic respiratory conditions.

The Division of Newborn Medicine specializes in treating babies with a wide range of congenital and acquired conditions.

The Medical Intensive Care Unit (MICU) is a 22-bed facility dedicated to the care of children with a wide range of critical illness diagnoses.

The NICU Growth and Developmental Support Program provides ongoing medical and developmental support for children and their families.