What are arteriovenous malformations?

Arteriovenous Malformations (AVMs) are abnormal connections between arteries and veins that are congenital (present at birth).

No known food, medication, or activity during pregnancy can cause an AVM.

AVM tissues removed after treatment are being studied by researchers in the Vascular Biology Program. These studies may lead to better information about both the cause of AVMs as well as possible new treatments.

How common are AVMs?

AVMs are relatively rare birth defects. They occur approximately once in every 500 births.

What are the symptoms of AVMs?

AVMs develop before birth. Usually an AVM is seen as an innocent stain on your child’s skin at birth; often they begin to enlarge in childhood and adolescence.

In time, if the blood flow through an AVM is excessive, your child’s heart can become overworked.

AVMs can occur in any organ in the body. They occur most frequently in the parts of the body below (in order of frequency): 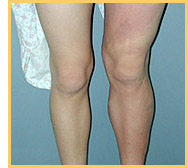 In infancy and childhood, the blush of an AVM can be mistaken for hemangioma (the most common tumor in babies).

What problems are associated with AVMs?

Parkes Weber syndrome — In this disorder, several AVMs plus overgrowth of a limb combine to put extra strain on the heart.

Our research collaborators have identified a gene that is changed in about one half of the patients with this syndrome.

It’s sometimes accompanied by a facial capillary stain and/or overgrowth on one side of the body.

We don’t really know. They are believed to be caused by a mistake in the formation of the normal connections between arteries, veins and capillaries that occurs during early embryonic life.

No known food, medication, or activity during pregnancy can cause an AVM.

How are AVMs diagnosed?

Your child’s doctor may be able to tell with a physical examination of your child. Around the area of the AVM, the skin is warm and, in time, the pulsation of blood flow can be felt.

After the exam, your child’s doctor will probably want to do one or more of the following procedures:

How are AVMs treated?

Treatment often depends on where your child's AVM is located.

AVMs in other parts of the body

What research is being done on AVMs?

Investigators hope to learn more about AVMs by studying the normal development of arteries, capillaries, and veins during the embryonic period. By understanding the formation and growth of these vascular channels, we hope that defective messages can be interpreted.

Learn about the Boston Children's Hospital Department of Plastic and Oral Surgery.

Learn more about Head, Neck and Skull Base Surgery Program