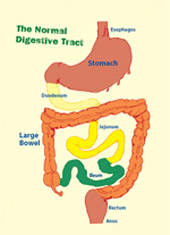 The human digestive tract ("food tube") begins with food entering the mouth, traveling down the esophagus into the stomach where it is eventually broken down by enzymes and mixed up into soupy, partly digested food. The food then moves from the stomach into the bowel through the small intestine (there are three parts of the small intestine: the duodenum, the jejunum and the ileum). This is where the food is broken down even more, the fats are digested and the nutrients are absorbed into the body through the lining of the small intestine. The next section is the large intestine, which is also known as the colon. This is where water and minerals are absorbed from the digested foods. This becomes the brownish, semisolid waste called feces (stool or "poop") which is stored in the rectum. Once the urge to have a bowel movement happens, the stool is passed out of the body through the anus.


What is Ulcerative Colitis?

Ulcerative Colitis is an inflammatory bowel disease in which the inner lining of the large intestine (colon) and rectum become inflamed. Inflammation usually begins in the rectum and lower large intestine (where its severity is often the worse), and spreads upward to potentially involve the entire colon. The inflammation causes diarrhea and frequent emptying of the colon. As cells on the surface of the colon die and slough (fall) off, ulcers (open sores) form, causing pus, mucus, and bleeding. You may notice pus, mucus and blood in your stool.


What is Familial Adenomatous Polyposis (FAP)?

Familial Adenomatous Polyposis is an inherited familial disorder characterized by the gradual formation of polyps (small projections inside the bowel) throughout the colon and rectum. Colorectal cancer will develop if left untreated. Most people who have FAP have a family history of FAP.