What is a splenectomy?

A splenectomy is a surgical procedure to remove your child's spleen if it's diseased or not functioning.

There are several conditions for which a splenectomy may be needed: 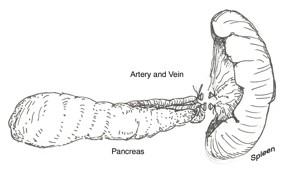 If your child's spleen has been removed, ask your child's doctor about the vaccine for seven strains of pneumococcal organisms that is now available to supplement the original vaccine for 23 strains. This conjugated vaccine produces a stronger and longer lasting response than the older vaccines.

What does the spleen do?

Why does my child's spleen need to be removed?

In most cases, when the spleen is removed for blood disorders (spherocytosis, elliptocytosis, Idiopathic thrombocytopenic purpura (ITP), sickle cell anemia), the spleen is functioning perfectly normally and the abnormalities of the blood are producing the problem.

The normal red cell is disk shaped and as it ages, the internal membranes break down and the cell assumes a spherical shape and is removed by the spleen approximately 100 days after it is created.

In idiopathic thrombocytopenic purpura (ITP), the platelets are often coated with antibody, which has been mistakenly produced by the body's immune system.

This coating of the platelets with antibody leads the spleen to see them as foreign and filter them from the blood leading to excessive destruction.

Some children can develop a life-threatening crisis where blood pools in the spleen, which becomes enlarged.

How do I prepare my child for surgery?

Before your child has an elective splenectomy, a doctor should administer should vaccines against pneumococcal, Haemophilus influenza and meningococcal organisms.

Your child's spleen will be removed by either "open" or laparoscopic methods.

What happens after surgery?

Most children stay in the hospital two to five days after the surgery. While there, your child will be monitored for signs of infection and to make sure the recovery is going well. Your child's doctor may prescribe an antibiotic for when you go home.

Are there any possible complications?

There are a few things to watch out for immediately following your child's surgery:

There are also some longer-term complications:

The Department of Pediatric Surgery at Boston Children's Hospital provides general and specialized surgical services to infants, children, and adolescents suffering from a wide range of congenital and acquired conditions.

Our Fetal Cardiology Program has performed more than 150 fetal interventions since 2001. Read more for questions to ask at your next ultrasound appointment.