What is infantile scoliosis?

Infantile scoliosis is an abnormal sideways curve of the spine that affects infants and toddlers. The condition refers to scoliosis that occurs in children younger than 3 years old. 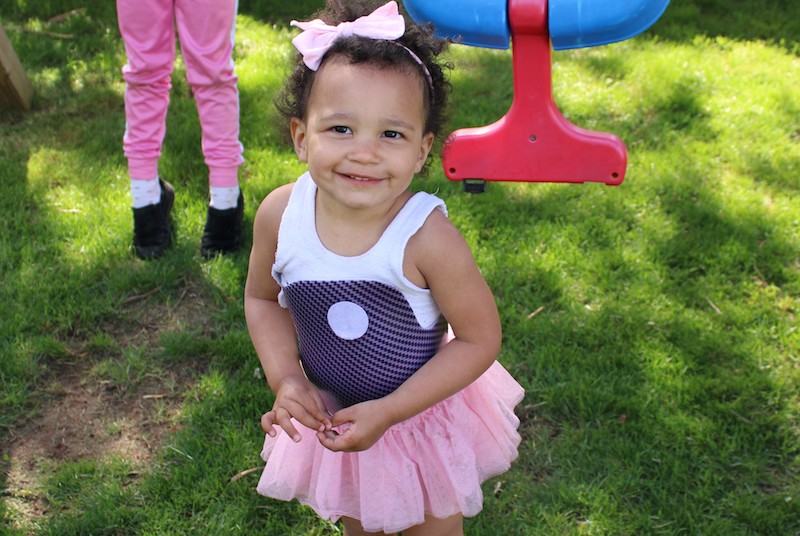 When Jeanne’s parents brought her to Boston Children’s Hospital, they discovered her infantile scoliosis could be treated with bracing — and without anesthesia.

Most children who need treatment for infantile scoliosis can be treated with casting and bracing. A very small number of children need spine surgery.

What are the symptoms of infantile scoliosis in babies and children?

If your child has infantile scoliosis, they may appear to always be leaning to one side. Other symptoms include:

Researchers and doctors don’t know what causes infantile scoliosis. The condition seems to run in families. Research has not yet uncovered a gene or genes that could cause the condition.

How is infantile scoliosis diagnosed?

Infantile scoliosis is typically diagnosed during a standard medical check-up. If your child’s doctor sees signs of an abnormal spinal curve, they will order follow-up tests, which may include x-rays, MRI, and a neurological exam. The results of these tests will help determine if your child has scoliosis, and if so, to what degree their spine is curved. 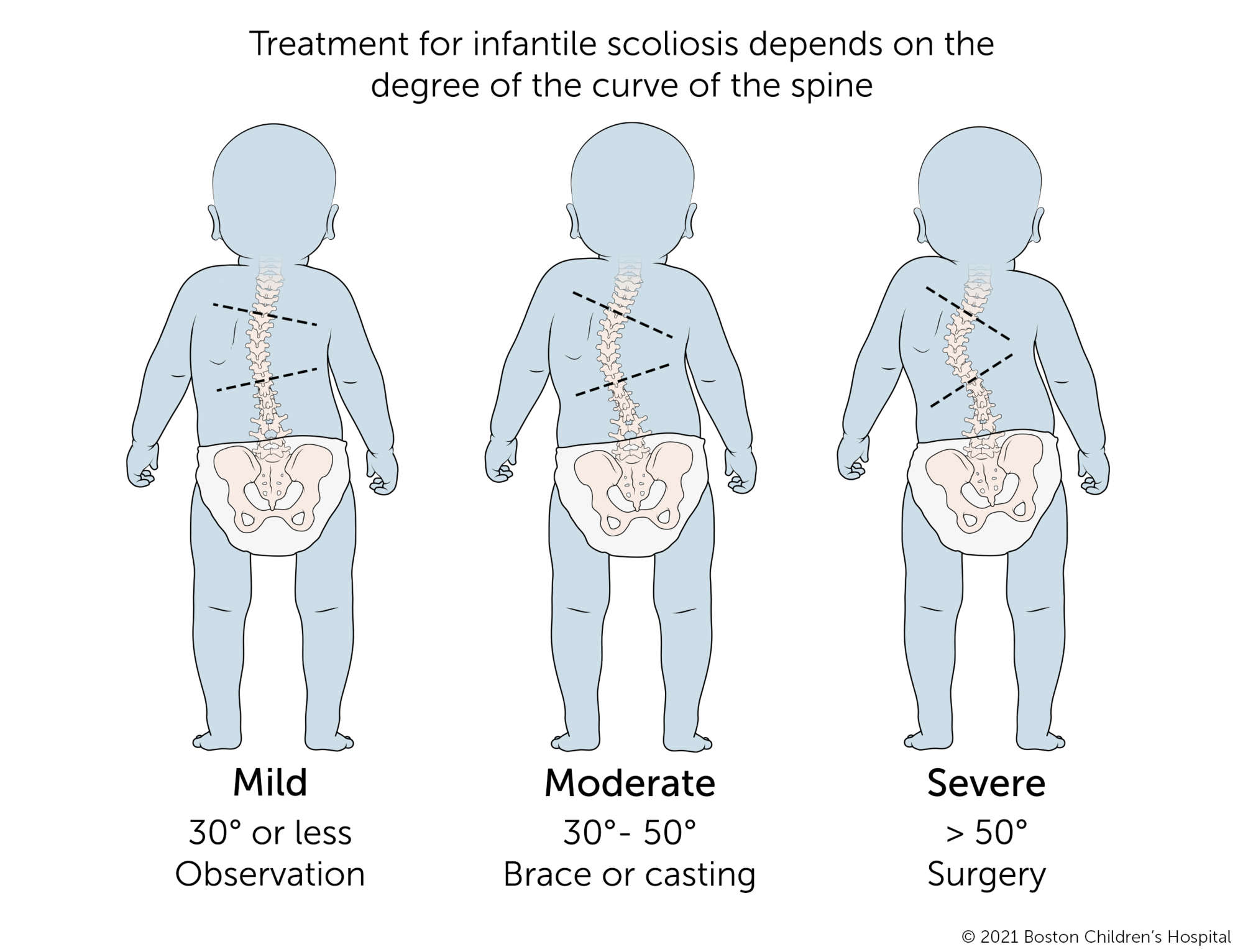 What are the treatments for infantile scoliosis?

How are casting and bracing used to treat babies and children with infantile scoliosis?

For many years, casting was the accepted treatment for babies and young children with moderate to severe infantile scoliosis. However, putting a cast on a baby or young child requires general anesthesia each time a new cast is applied, approximately every two to three months.

In recent years, specialists in Boston Children’s Spine Division and Boston Orthotics and Prosthetics have teamed up to develop a brace for infants and small children. The new brace design applies corrective forces to the spine much like a cast, without the need for cast application under anesthesia. The brace must be initially worn for 22 hours a day. It can be removed for daily bathing or if your child is ill.

Your child’s doctor will use x-rays to measure the success of the brace. If they see signs that the scoliosis is becoming more severe, they may recommend casting instead.

The goals of casting and bracing are the same: to stop infantile scoliosis from progressing, and in some cases, to correct the curve, either fully or partially.

If your child is treated with casting, you will need to bathe them with sponge baths for as long as they wear the cast. It’s also best to keep your child from overheating during the summer months by planning activities in places or at times of day when temperatures are cooler.

The length of your child’s treatment with casting or bracing depends on their age, severity of the curve, and response to treatment. Many children who start off in a cast can later wear a scoliosis brace instead. Beating the odds and infantile scoliosis

After treatment for severe infantile scoliosis, Colin was finally strong enough to play with his sisters. “The more he played, the stronger he became."

What are the surgical treatments for infantile scoliosis?

The goal of surgery in very young children with scoliosis is to straighten the spine without interfering with the child’s growth. The most typical surgery for infantile scoliosis involves growing rods.

Growing rods are temporary implants that can be lengthened as a child grows. During an initial surgery, surgeons will attach the rods to the child’s spine above and below the curve. Every six months or so after the first procedure, a surgeon will lengthen the rods by about one centimeter to give the spine more room for growth. Lengthening is done through a small incision in the back and is typically an outpatient procedure.

In recent years, traditional growing rods have been improved with magnetic technology, which can be used once your infant reaches an acceptable size. The MAGEC (MAGnetic Expansion Control) System eliminates the need for repeat incisions. After an initial operation to attach the MAGEC System to the spine, a surgeon can lengthen the rods by an external controller that signals the implanted device to expand. 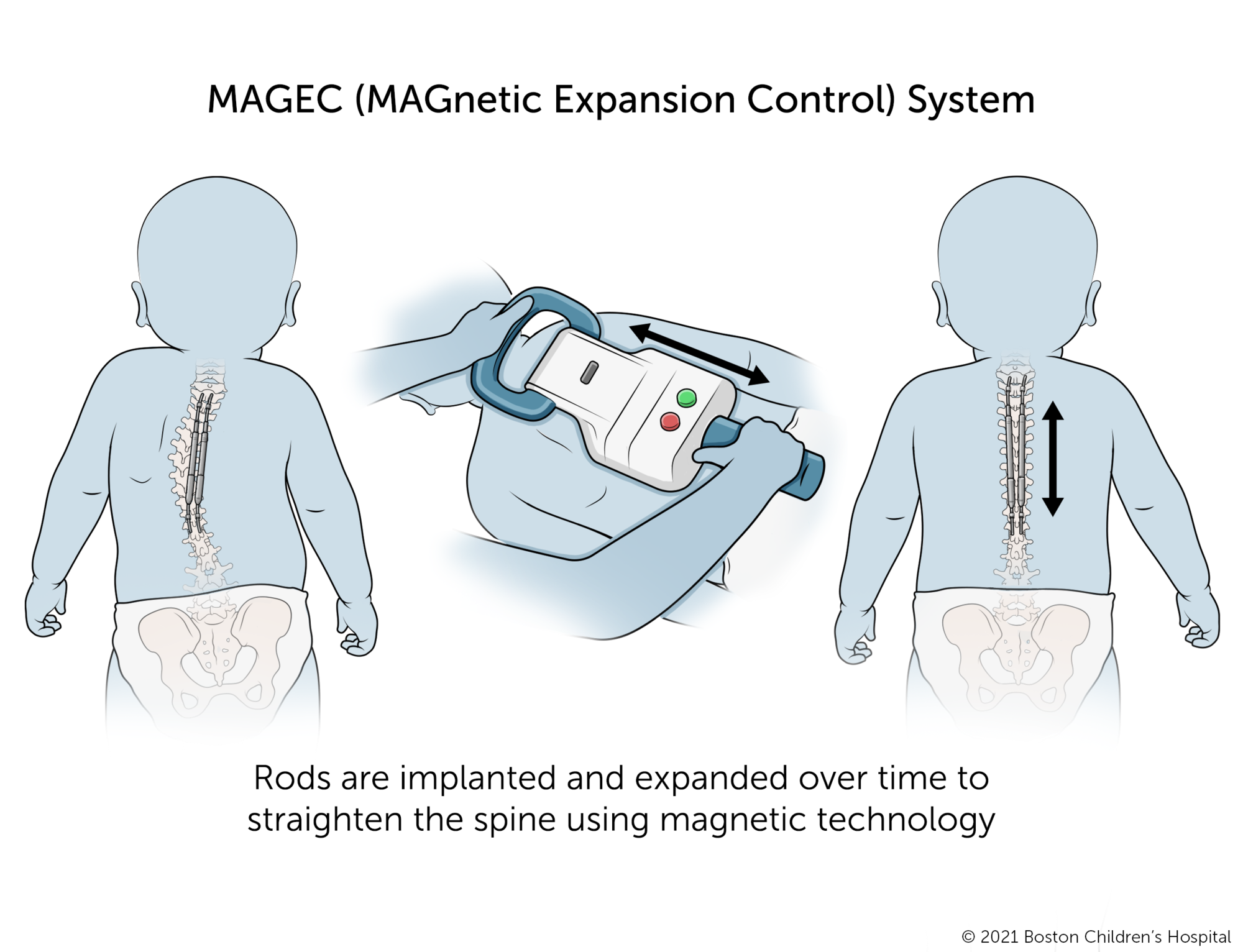 Whether traditional or magnetic, the growing rods will remain in place as long as your child continues to grow. Your child will need to wear a cast or brace throughout this period to protect their spine. After your child’s final growth spurt in late adolescence, the rods will be surgically removed and your child will have spinal fusion surgery to permanently stabilize their spine.

What is VEPTR™ technology? 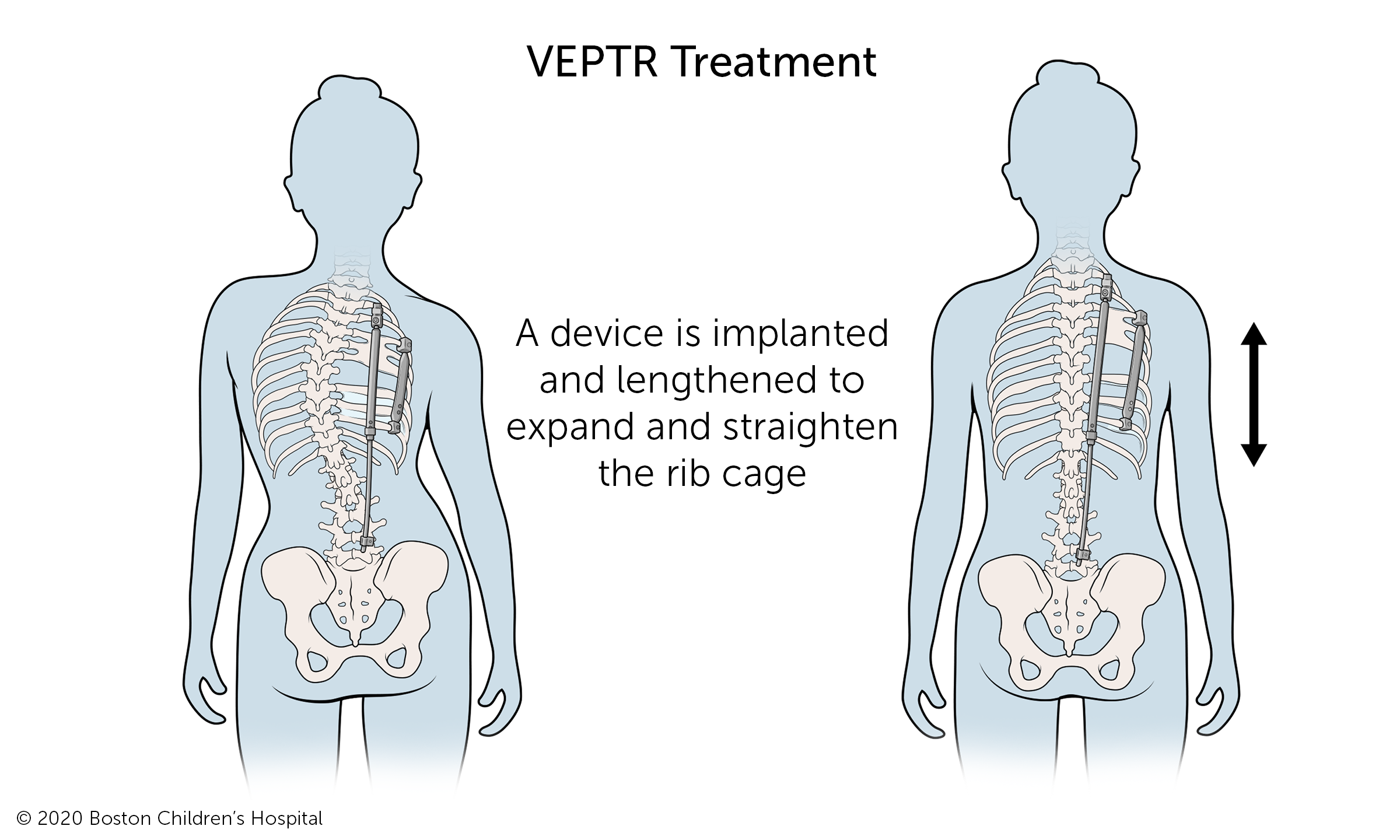 In some cases, children with infantile scoliosis have underdeveloped chest walls. The Expansion thoracostomy/VEPTR™ is an expandable titanium rib that expands the chest wall and creates room for the lungs to develop. In some cases, VEPTR also helps the spine to grow straight.

What is the long-term outlook for infantile scoliosis?

How we care for infantile scoliosis

The Spine Division at Boston Children’s Hospital is the largest and busiest pediatric spine center in the United States. Our spine specialists see thousands of spine patients every year. We treat all types of scoliosis and other spine conditions, from the most common to the most complex.

Whenever possible, we treat infantile scoliosis without surgery. For children who need surgery, our surgical team includes surgeons, anesthesiologists, and nurses with specific skills and expertise in spine surgery. Each member of our team performs hundreds of spine surgeries a year and helps ensure quality and safety before, during, and after surgery.