What is dyskeratosis congenita?

Dyskeratosis congenita (DC) is a rare condition classified under a broad spectrum of genetic disorders known as telomere diseases. These diseases can often cause bone marrow failure and lung disease.

DC may also cause pulmonary fibrosis, a condition that leads to the accumulation of scar tissue in the lungs, decreasing the flow of oxygen into the bloodstream.

Although congenital (present at birth), the signs and symptoms of DC often may not appear until late childhood or early adolescence, and in some cases, not until adulthood.

DC in its classic form is rare, estimated to affect approximately one person per one million, but the broader spectrum of telomere disease may affect 10-100 times as many people.

A clinical trial bought him time, and a dedicated doctor offers hope. 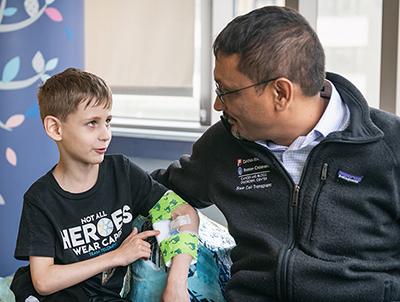 How we care for DC

Our Bone Marrow Failure Treatment Program at Dana-Farber/Boston Children's Cancer and Blood Disorders Center has a specialized team that focuses on the treatment of children, adolescents and young adults with DC. This team is comprised of clinicians from a range of specialties, including those in our world-renowned Pediatric Stem Cell Transplant Program.

We have access to the most advanced treatments and diagnosis, including genetic mutation identification and ongoing clinical trials investigating new treatments. Our team is personally invested in finding solutions for those looking for answers.

Our areas of research for DC

We are using our vast resources within Dana-Farber/Boston Children's to find new ways to improve the lives of people with dyskeratosis congenita. Our research involves a comprehensive range of activities, including:

What are the symptoms of dyskeratosis congenita?

Dyskeratosis congenita (DC) symptoms and the onset of symptoms vary among those affected. In some individuals, the condition may be mild and in others more severe.

Characteristically, the signs and symptoms include:

The absence of these classic symptoms does not rule out DC, and depending upon the severity, some individuals may have other potential complications, such as:

Eventually, most people with DC will develop bone marrow failure. It may happen in early childhood, during adolescence, or it may not occur until adulthood.

The underlying cause of DC is the presence of shortened telomeres. Telomeres protect genetic data. Like the plastic tip on the end of a shoelace, telomeres keep chromosome ends from fraying and fusing together, while allowing cells to divide.

Each time a cell divides, the telomere shortens, and when they become too short the cell stops dividing. People with DC have a gene abnormality that disables their ability to maintain telomeres. Their cells stop dividing too early, resulting in failure of their organs and disease.

DC is most often inherited, passed from parent to child, although, some parents may never show signs of the condition. Less often, it is not inherited but rather a new gene mutation in the child.

How is dyskeratosis congenita diagnosed?

Because people have different symptoms at different points in their lives, it is often difficult for doctors to diagnose dyskeratosis congenita (DC). If the condition is suspected following a clinical evaluation and detailed family history, your physician may order some or all of the following tests:

What are the treatment options for DC?

The treatment plan for DC is dependent upon the individual and the progression of their illness. Milder forms of DC may not require treatment for many years. For those who have a more severe form of the condition, there are a couple of treatment options available.

Steroid drugs, known as androgens, can improve blood counts in individuals with DC. The benefits of androgen therapy are only temporary, and the length of time this treatment improves bone marrow function varies.

The Hematopoietic (Stem) Cell Transplant Program at Dana-Farber/Boston Children's Cancer and Blood Disorders Center is one of the largest and most experienced pediatric stem cell transplant programs in the world.