One of the most important unsolved problems in prostate cancer today is to find a way predict the eventual outcome of an individual's prostate cancer at the time he is first diagnosed. Although the PSA test has allowed considerably earlier diagnosis of prostate cancer, a positive PSA only tells that there is prostate cancer present today. It does not predict what will happen to that cancer tomorrow. What is necessary is to find prognostic markers that will tell which tumors will stay confined to the prostate over time and which are at risk for metastasis. In prostate cancer, a marker may be considered predictive if it can distinguish which patients require immediate treatment and which patients can safely be monitored over time without immediate radiation or surgery.

The best diagnostic markers are those that distinguish an early tumor from normal tissue. If such a marker is present in a tumor or in the blood of a patient, then a tumor is likely present. The best predictive markers may be those that arise later in the course of tumor development, those that arise around the time that the tumor is becoming metastatic. The presence of such markers at the time of diagnosis may be sufficient to indicate that a patient is at risk of developing cancer metastases. We have made an effort to find such markers for human prostate cancer.

We have found one marker that appears promising as a predictive marker for prostate cancer. Called thymosin beta 15 or TB15, this molecule regulates the rate of movement of prostate cancer cells. Normal cells and early cancer cells make no TB15. As cells become metastatic, the levels of TB15 begin to rise and the cells become able to move faster (Bao L, Loda, M, Janmey PA, Anand-Apte B, Zetter BR. Thymosin _15: A novel regulator of tumor cell motility upregulated in metastatic prostate cancer. Nature Medicine. 1996; 2:1322-1328). Rapid movement is an important component of metastatic tumor cells. (Please see the section of this web site on cell migration.) 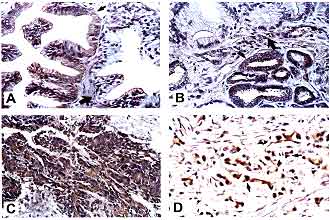 New results in our laboratory show that the presence of TB15 in prostate cancer patients at the time of diagnosis correlates with the later development of recurrent or metastatic prostate cancer 1-11 years following surgery to remove the prostate. Patients who are TB15 positive at the time of diagnosis have a very high probability of having recurrent disease as evidenced by elevated PSA or positive bone scan at some time following surgery. In contrast, patients with no evidence of TB15 in their cancer cells are much less likely to have a tumor recurrence, regardless of the initial grade of the tumor.

We believe that thymosin beta 15 is a prototype for a new class of tumor marker whose presence or absence can be used as an indication of the eventual outcome of the tumor. Such predictors are useful not only in prostate cancer but in breast cancer and other tumors where there are multiple treatment options. We do not believe that any one marker will be perfect in predicting outcomes but rather that panels of such markers will be compiled for each tumor type and used to predict the likely outcome and best treatment protocol for individual patients.