Regulation of gene expression is essential for development and function of all cells. The complex cooperation of transcription factors and their required chromatin accessibility is orchestrated by epigenetic histone modifications. While widely studied in stem cell biology, little is known about epigenetic regulation in the immune system.

Published in Nature Immunology this week, the Winau lab in collaboration with Stuart Orkin's group investigated the impact of histone methylation on leukocyte development and found an exclusive effect of histone H3-lysine 27 (H3K27) demethylase UTX on thymic development of invariant natural killer T (iNKT) cells (Figure 1). Although iNKT cells represent only a small subpopulation of T lymphocytes, they have powerful regulatory functions and are therefore involved in multiple diverse conditions, including infections, autoimmunity, and cancer. Thus, this study on UTX-mediated mechanisms of epigenetic regulation in iNKT cells is of great interest to biologists from many disciplines. 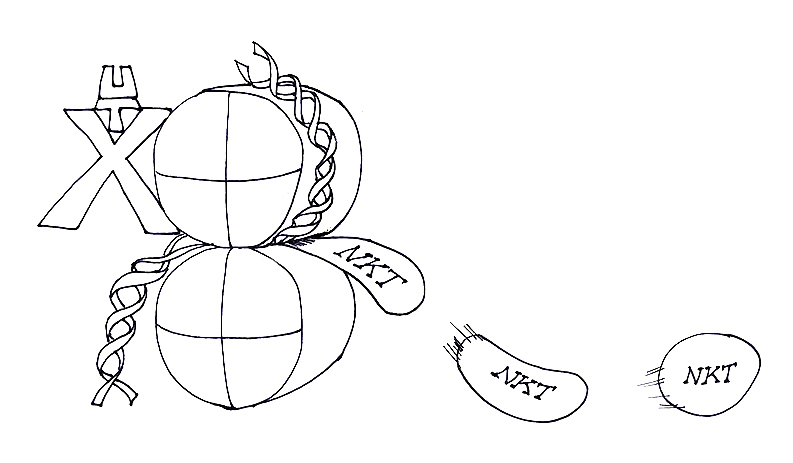 The picture shows UTX as a homunculus, with the U the head, T the neck, and X the arms and legs, directly affecting histone function. Admittedly, in active euchromation, histones (organized in nucleosomes) do not sit on top of each other like in a printing press a la Gutenberg, but lets consider that artistic freedom. Essentially, UTX-mediated histone function facilitates the making of NKT cells. Artwork by Jessica Kim.

Previously, studies have investigated single transcription factors and their role in iNKT cell development. The result is a long list of factors that influence iNKT cell generation in the thymus. However, the question arises of how to make sense out of a myriad of different transcription factors and their functional interplay to allow for proper iNKT cell development. Winau and colleagues sought to integrate their different functions into an epigenetic framework that regulates lineage-specific gene expression.

First authors Semir Beyaz, Ji Hyung Kim, and Luca Pinello demonstrated that UTX regulates a specific gene expression signature in iNKT cells. They described a dual mode of action in which UTX binds to the promoters of signature genes and in parallel interacts with key iNKT cell transcription factors (such as PLZF) to control gene expression (Figure 2). Furthermore, this work introduces the AP-1 transcription factor JunB as novel master regulator of iNKT cell generation. In this context, the authors revealed target motifs of JunB in downregulated genes of UTX-deficient iNKT cells, and demonstrated that JunB binds to promoters of signature genes. Importantly, JunB protein physically interacts with UTX to promote its function. Translating these findings to the in vivo model, JunB-deficient mice exhibited impaired development of iNKT cells.

Ultimately, the team demonstrated the super-enhancer landscape in iNKT cells and assessed their chromatin accessibility using genome-wide ATAC-Seq. In the absence of UTX, accessibility of super-enhancers is impaired, repressive H3K27me3 marks accumulate, and consequently gene expression is reduced.

i. UTX is recruited to the promoters of signature genes of the iNKT cell lineage. Through its demethylase function, UTX removes repressive H3K27me3 marks from gene promoter regions.

ii. In parallel, UTX facilitates the formation of active H3K4me3 via its interaction with MLL. Subsequently, both histone modifications promote active transcription of iNKT cell genes. Additionally, UTX is able to bind key iNKT transcription factors, such as PLZF and the newly identified JunB, which act on promoter elements to allow gene expression.