Poison ivy: an insidious plant that, when brushed up against, quickly initiates an allergic reaction comprising red skin, swelling, burning, and intense itching that can last for weeks. What's more? Poison ivy grows in all but four states in the U.S., as well as in parts of Asia. The threat of this allergic reaction is ubiquitous, and no immediate cure has been found — yet. Enter, the molecule CD1a.

In a report published online in Nature Immunology, Dr. Ji Hyung Kim and Dr. Florian Winau, Boston Children's Hospital's Program in Cellular and Molecular Medicine and the Department of Microbiology and Immunobiology at Harvard Medical School, have been studying the role of CD1a on Langerhans cells in skin immunity through the use of a transgenic mouse model that expresses human CD1a. As human Langerhans cells express CD1a and those in mice do not, studying CD1a's role on Langerhans cells was not feasible in a mouse model. The Winau laboratory's study will be the first published on the role of CD1a in skin immunity using an in vivo system.

With allergic reactions to poison ivy, poison oak and poison sumac affecting as many as 50 million Americans each year, according to the American Skin Association, finding a method to block the consequences of these pervasive plants would make an immense difference for many who suffer. The part of the poison ivy plant causing dermatitis is the oily sap containing the lipidic substance urushiol. When the Winau lab examined the structure of urushiol, they found it to be similar to lipid antigens known to be presented by CD1a. After exposure to urushiol, CD1a-transgenic mice showed strong skin inflammation, reminiscent of what is seen in humans. They also found that human subjects with poison ivy dermatitis showed a similar inflammatory signature following CD1a-mediated urushiol recognition. The next step was to test whether they were able to prevent an inflammatory response by using an anti-CD1a blocking antibody. Treating mice with this antibody, and then introducing poison ivy, Winau and Kim observed that skin inflammation was substantially reduced. 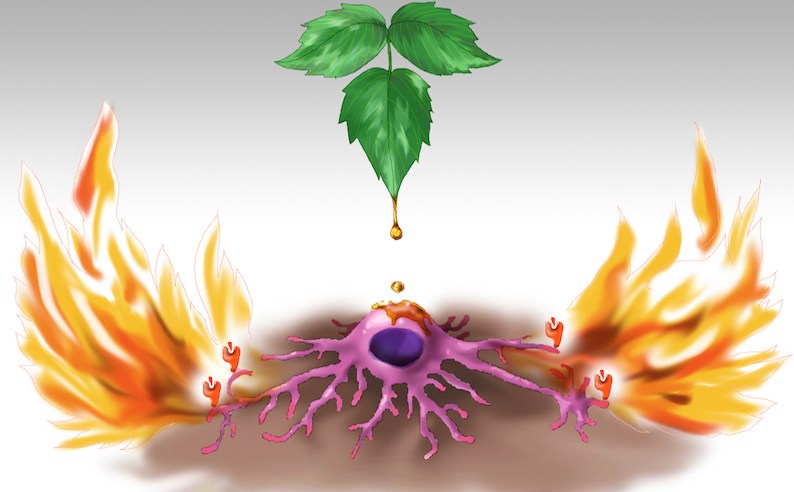 Not only could the Winau lab's research on CD1a lead to future therapies that would help the large number of individuals affected by poison ivy dermatitis, but it could also potentially help those suffering from psoriasis. They observed pronounced inflammation mediated by the cytokine interleukin 17 (IL-17) in the urushiol model using CD1a-Tg mice. "Since IL-17 is known to be prominent in the pathogenesis of psoriasis, we subsequently tested a psoriasis model using our transgenic system", says Kim. In this model, CD1a strikingly amplified skin inflammation. Psoriasis is an autoimmune disease whose causative mechanism is not known. While a few antigens have been found to possibly have a role in igniting the disease, including an antimicrobial peptide, these are not sufficient explanations for the affliction. In the psoriasis model, the Winau lab has found several self lipids that act as antigens presented on CD1a to T lymphocytes to produce IL-17, ultimately causing skin inflammation. "We also studied psoriasis patients and found that they exhibited increased CD1a-mediated inflammatory responses", says Kim. "It is tempting to speculate that the search for protein antigens in psoriasis is possibly elusive because self lipids from skin could represent dominant antigens for autoimmunity. Basically, we propose the existence of pathogenic lipids", says Winau.

This development from Winau and Kim is a valuable contribution towards future therapies, and indeed the Winau lab is currently collaborating with industry to develop CD1a-based drugs for inflammatory skin diseases.

In addition to the implication Kim and Winau's research has on future therapies for skin inflammation, one has to consider the contribution to the field of Immunology as well. Though there have been a number of published studies surrounding Langerhans cells in the murine system, none of the previous publications have examined the complete function of these cells, including the role that CD1a molecules play, due to the absence of CD1a in mice. "This is an enormous oversight. It's as if one were to study dendritic cells that lack expression of MHC-II," says Winau.

The Winau lab's collaborator, Dr. Jamie Rossjohn, and his laboratory, were able to resolve the crystal structure of CD1a binding urushiol, showing no evidence of haptenization — the process of small molecules covalently attaching to proteins, thereby becoming antigens. Instead, this structure shows urushiol bound in the antigen-binding cleft of CD1a and demonstrates that urushiol is a bona fide antigen presented by CD1a. "Current opinion holds that allergic contact dermatitis is driven by small molecules that act as haptens, which modify host proteins to become full immunogens to trigger immune responses. We propose that allergens can function as true antigens presented on CD1a to activate CD1a-restricted T cells that cause skin inflammation. This is a new concept to understand allergic skin disease," says Winau.