The effect of age on ligament healing | Overview

The Effect of Age on Ligament Healing

Once we discovered that this “bioenhanced repair” technique resulted in a repair with equal strength to an ACL reconstruction in young animals, we also evaluated the effect of age on functional ligament healing and have found that skeletally immature animals heal more quickly and more effectively than adult animals(1).  We found that ACLs from skeletally immature animals had significantly improved structural properties over those of adult animals after three months of healing in both the untreated and repair groups(1). We determined that the increased infiltration of the wound site in vivo(2) was likely a result of the improved migration and proliferation abilities of the younger cells(3;4), which in turn was likely due to the increased number of growth factor receptors on the younger cells(5) (Fig 1). 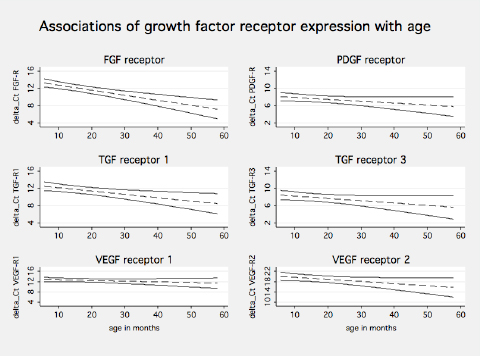 We have also recently discovered that the stimulation of ligament repair and regeneration using the “bioenhanced repair” technique prevents the development of PTOA after an ACL injury. In our most recent study, one year after ACL injury and surgery, 80% of the knees that had a conventional ACL reconstruction developed PTOA, while the knees in the bioenhanced repair group did not (Figs 2-3). The power of our animal model is that a specific injury that strongly predisposes the injured joint to PTOA can now be used to compare changes in the joints of animals whose surgical repair prevents PTOA from those in which conventional therapy does not prevent PTOA.

Figure 2: The distal femur cartilage 1-year after (A) an untreated ACL rupture, (B) after conventional ACL reconstruction and (C) after bioenhanced ACL repair. Note the damage to the medial femoral condyle in the untreated and ACL reconstructed knees (white arrows) and the lack of damage in the medial femoral condyle in the bio-enhanced ACL repaired knee (black arrow).