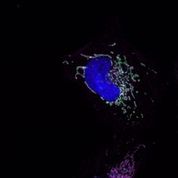 The Ploegh Laboratory is interested in molecular aspects of immune recognition.

This pursuit is complemented by the development of new technologies. These include the application of enzymatic methods for site-specific labeling of proteins. We then apply these methods to the modification of nanobodies, the smallest antibody-derived fragments that retain the capacity to bind antigens. The past few years have seen a focus on discovery of alpaca-derived nanobodies that recognize surface antigens on lymphocytes and myeloid cells. When properly modified with fluorophores or radioisotopes, the labeled nanobodies can be used for imaging applications, both for microscopy and to perform whole animal non-invasive imaging experiments by positron emission tomography (PET). The latter approach has been useful in examining the response to checkpoint blocking antibodies We are now developing a suite of nanobodies that can be used in phenotypic screens to perturb intracellular protein-protein interactions, a concept that we have applied to the discovery of nanobodies with antiviral activity.

The enzymatic methods for protein modification are exploited also in the manipulation of immune responses. We find that attaching an antigenic payload to a nanobody that seeks out professional antigen presenting cells can induce strong T cell responses and improve antibody formation. When applied under non-inflammatory conditions, such nanobody-antigen adducts appear capable of imposing antigen-specific tolerance, an approach we first explored by attaching offending self antigens to modified red blood cells as a means of attenuating autoimmune disease.

Much of the above relies on a chemistry capability, centered on the synthesis of modified peptides. In the past we have used modified peptides (peptide vinyl sulfones) as a new class of proteasome inhibitors, an approach extended later to the design and synthesis of electrophilic ubiquitin derivatives. The latter serve as activity-based probes that detect ubiquitin-specific proteases. Most of the enzymatic methods fro protein modification rely on the use of sortase A, an enzyme that recognizes an LPXTG motif at or near the C-terminus of a protein to be modified.

More recently we have begun to use plant derived asparagine endopeptidases, which enable a quasi-irreversible modification of proteins with payloads of interest. The lab makes use of a number of mouse models to study anti-tumor immunity and anti-viral responses. We have made extensive use of somatic cell nuclear transfer to create mouse models with more physiological expression of rearranged antigen receptor genes. We refer to these animals as transnuclear mice. This approach has been applied to CD4 and CD8 T cells, iNKT cells and B cells. In the case of the CD4 T cell compartment, we are particularly interested in a line of mice that recognizes an antigen derived from Parabacteroides goldsteinii, a commensal gut-resident microbe. Having identified the actual peptide antigen recognized, this model should allow us to shed light in interactions between a healthy microbiota and adaptive immunity.

Current (bio)chemistry in the lab

We apply chemistry to study problems in cell biology and immunology. We use enzymes, in combination with synthetic compounds, to perform reactions that would be difficult or impossible to achieve using chemistry or biology alone. Ligase enzymes that catalyze the site-specific formation of an amide bond (Sortase A, butelase, OaAEP1) are used to label proteins with tags of choice, including fluorophores, radiometal chelators, non-natural peptides, click chemistry handles, bioactive small molecules, etc. The selectivity of these enzymes allow us to achieve selective labeling in complex biological environments in which standard approaches fail. For example, we have demonstrated an ability to selectively label appropriately tagged proteins on the surface of live cells using Sortase A.

We have applied this approach, in combination with nanobodies, to produce nanobody conjugates used as cancer vaccines and as immunogens for the generation of antibodies against poorly immunogenic cargoes. Nanobody conjugates have also been used as imaging agents (immunofluorescence, PET), where the small size of nanobodies enables enhanced penetration and higher quality imaging. Site-specific labeling also enables the production of fusions, such as C terminal-to-C terminal fusions, that are not accessible by genetic means. This enables us to use nanobodies to deliver bioactive polypeptides to destinations of choice. Finally, we are addressing the shortcomings of enzymatic ligation chemistry, such as the reversibility of the ligation reaction, through the exploration of new enzymes and new chemistry.