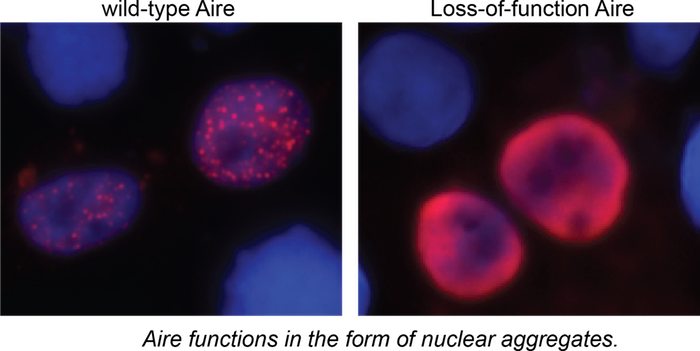 Unlike the innate immune system, the adaptive immune system establishes its ability to discriminate between self vs. non-self through a series of positive and negative selections of T- and B-cells. In establishing immunological tolerance of T-cells against self antigens, a transcriptional regulator, Aire, plays a central role by up-regulating thousands of peripheral tissue antigens in the thymus medulla, the site of negative selection of self-reactive T-cells. Mutations that impair proper functioning of AIRE result in development of multiorgan autoimmune disease, known as APECED. Aire functions through formation of a large complex with proteins involved in transcriptional control and mRNA processing. However, the precise molecular composition of these complexes, their assembly pathways and the mechanism by which they regulate promiscuous gene expression are poorly understood. Adding to this challenge is a poor biochemical behavior of the Aire protein, which has thus far defied rigorous analyses of its function. We are currently investigating the structural assemblies underlying the apparent aggregation behavior, and how the assembly structure and process play a role in target site recognition and transcriptional regulation.

We use a combination of crystallography, electron microscopy, biochemistry and cell biology to dissect molecular principles that govern these molecules in the vertebrate immune system.