Colleagues in Saudi Arabia and Turkey originally brought this syndrome to our attention because patients all had moderate to severe Duane syndrome Type III, an eye movement disorder that restricts horizontal gaze. Most patients also have bilateral sensorineural hearing loss due to absent cochleas and rudimentary inner ear development.

Right: This proband had a common cavity defect characterized by an absent cochlea, vestibule and semicircular canals.

Internal carotid artery malformations are present in many patients, and can vary in severity from unilateral hypoplasia to bilateral agenesis.

Depending upon ethnicity, a subset of patients manifest moderate to severe central hypoventilation, and some have facial weakness, swallowing difficulties, vocal cord paresis, and conotruncal heart defects. Skull and craniofacial abnormalities, including facial asymmetry and external ear defects, can also segregate with the clinical findings above. Finally, autism spectrum disorder and mental retardation are found in some patients.

We carried out SNP-based linkage analysis in a Saudi Arabian family and identified a single, fully informative 9-Mb region on 7p15.3-p14.3 in which only the affected children were homozygous. Further analysis using micro-satellite markers and DNA from other similarly affected Saudi Arabian pedigrees identified a haplo-identical region of approximately 300 kb on 7p15.2, suggesting a founder mutation might exist in this population. 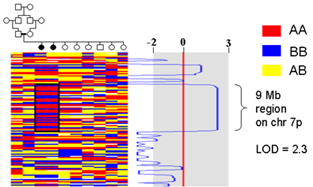 Within this 300 kb haplo-identical region we analyzed HOXA1 for mutations and identified a homozygous guanine insertion, 175-176insG, predicted to result in a reading frameshift and the introduction of a premature stop codon in exon 1. Following this, we identified two additional HOXA1 mutations in one Turkish and several Native American pedigrees. We predict that these mutations result in truncated mutant proteins lacking all known functional domains, thereby resulting in a complete loss of HOXA1 function.

This work was carried out by our graduate student, Max Tischfield.

HOXA1 is the most 3' HOX gene in cluster "A" and the first HOX gene expressed in mammals. It is also among the first genes expressed in the central nervous system, and accordingly, plays a critical role in brain and head development. HOXA1 is primarily responsible for segmenting the embryonic hindbrain into seven transient compartments called rhombomeres. Each rhombomere has a distinct set of molecular and cellular properties that is necessary for organizing groups of immature neurons into functional networks that will eventually mediate important functions such as breathing, eye movement, and mastication.

Our lab has recently discovered that homozygous loss of HOXA1 function in humans can result in a group of disorders called the HOXA1-related syndromes. Although the phenotypes of patients with homozygous HOXA1 mutations are variable and depend upon ethnicity, affected individuals all have bilateral Duane syndrome type III, a horizontal eye movement disorder that results in gaze restrictions away from and towards the nose.

Additionally, most patients also have severe bilateral sensorineural hearing loss resulting from growth arrest of the inner ear, including absence of the cochleas and semicircular canals. Many also have either unilateral or bilateral malformations the internal carotid arteries, the vessels that supply anterior circulation to the head and brain. The artery malformations vary in severity, and can range from unilateral hypoplasia (mild) to bilateral absence (severe). Some patients may also manifest defects in the outflow tract of the heart, including Tetrology of Fallot. Moderate to severe hypoventilation and facial weakness can also result from loss of HOXA1 function, and some patients may have swallowing difficulties or vocal cord paresis. Finally, mental retardation and autism spectrum disorder (ASD) are found in a subset of patients.

Below is a diagram describing the proposed pathology of the horizontal gaze abnormalities in the HOXA1 related syndromes. Loss of HOXA1 function results in bilateral absence of the abducens cranial nerve (green hash marks), which normally innervates the lateral rectus muscle. Contraction of this muscle results in eye movement away from the nose (abduction).