Upgaze, or turning the eye upward, is primarily the work of the superior rectus muscle, with some contribution by the inferior oblique muscle.

Downgaze, or turning the eye downward, is primarily the work of the inferior rectus, with some contribution by the superior oblique. 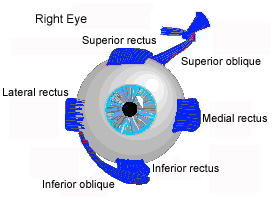 Abduction, or turning the eye outward toward the ear, is primarily done by the lateral rectus.

Adduction, or turning the eye inward toward the nose, is primarily done by the medial rectus.

The extraocular muscles are innervated by three cranial nerves (CN), CN III (oculomotor nerve), CN IV (trochlear nerve), and CN VI (abducens nerve). The relationship between the cranial nerve nuclei in the brainstem, the cranial nerves, and the muscles that the nerves innervate can be visualized in the schematic below.

CN III is a bit more complicated, as it innervates all of the remaining extraocular muscles. Therefore, each oculomotor nucleus is actually made up of overlapping subnuclei, and each subnucleus sends its axons to innervate a specific extraocular muscle. The right and left oculomotor nuclei are located in the midbrain. The axons from the right or left nucleus leave the midbrain and come together to form the body of the right or left CN III. As the nerve enters the orbit, it splits into the superior branch of CN III and the inferior branch of CN III. The superior branch of CN III innervates the superior rectus and the levetor palpebrae superioris. The lower branch innervates the medial rectus, inferior rectus, and inferior oblique.

If you would like to review the result of malfunction of specific extraocular muscles and cranial nerves, you are likely to find the UC Davis Health System Neurological Eye simulator fun and educational. The eyes follow the mouse around the screen. A word of caution, however: consider closing all essential documents before clicking on the link. Otherwise, it may freeze your computer.