Our laboratory has identified one genetic locus for isolated congenital ptosis (PTOS1)1. This was done using the technique of linkage analysis. The PTOS1 locus is on the short arm of human chromosome 1 (1p32-34.1), as shown in the schematic to the left. The critical region for the PTOS1 disease gene is 3 cM, and is defined by the flanking polymorphic markers D1S447/D1S2733 and D1S1616.

Ptosis (or blepharoptosis) is the most common anomaly of the eyelid and presents as an abnormal drooping of the upper eyelid with secondary narrowing of the vertical palpebral fissure of the eye. It can be unilateral or bilateral. When present at birth (congenital), it can occur as an isolated neuromuscular disorder with no associated findings (isolated congenital ptosis) or may be part of a larger spectrum of birth defects. Individuals with congenital ptosis suffer from restricted vision in their upper quadrants and frequently require surgery to elevate their eyelids. Hereditary isolated congenital ptosis is generally inherited in an autosomal dominant fashion with incomplete penetrance and is characterized by a variable degree of unilateral or bilateral drooping of the upper eyelids.

We have identified a single family with more than 150 members affected by autosomal dominant, isolated congenital ptosis. It is this family whose disease gene maps to the PTOS1 locus. The degree of ptosis varies significantly among affected members of this family, as demonstrated by the two family members below. They are photographed both in primary gaze and upgaze. 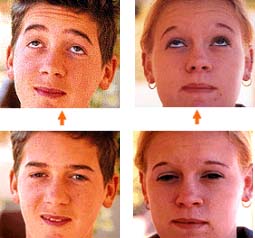 We do not yet know the pathologic basis of isolated congenital ptosis in this family. It is unclear if the disorder is neurogenic or myopathic. If neurogenic, however, we propose that it could result from a selective absence of the axons innervating the levator palpebrae superioris muscle that raises the eyelid. These absent axons are depicted in red below, and the malfunctioning levator muscle is in blue.