FEOM3 is the third genetic locus for CFEOM that our laboratory identified. This locus was identified using the technique of linkage analysis. The FEOM3 locus is at the telomere of the long arm of human chromosome 16 (16qter), as shown in the schematic to the left. The critical region for the FEOM3 disease gene is flanked by the polymorphic marker D16S498 to 16qter.

Thus far, two families have been identified that are linked to the FEOM3 locus. These families were studied in collaboration with Dr. Edward Doherty and his colleagues in New Brunswick, Canada1, and Dr David Mackey from The Royal Hobart Hospital in Tasmania, Australia2. The disorder in these families is a form of non-classic CFEOM. The disorder exhibits dominant inheritance but is variably expressed in affected individuals and may skip a generation (incomplete penetrance), as was found in the family enrolled through Dr Doherty. 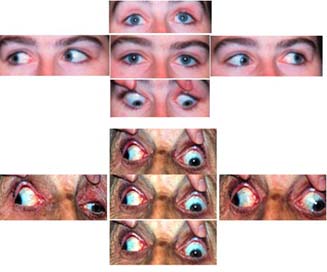 In the two CFEOM3 families we have identified, there is marked variability of clinical phenotype. Severely affected individuals are born with bilateral ptosis, with their eyes fixed in a downward and outward position, and with marked restriction of movement in both eyes. Forced duction testing is positive for restriction. This 'severe' phenotype is demonstrated by the photographs right, bottom most. in which the individual is looking straight on, up, down and to either side. Mildly affected individuals have normally positioned eyes but a limitation of vertical (upward) gaze, as demonstrated by the photographs of the family member right, uppermost. Moderately affected individuals have asymmetrical involvement with one eye severely and one eye mildly affected.

We now know the genetic basis of CFEOM3, mutations in the TUBB3 gene encoding component of microtubules, a neuronal specific tubulin. Please click on the press release links at the top of the page for details. The diagram below details the pathology for CFEOM3 demonstrating a variable absence of the entire cranial nerve III oculomotor unit, affecting the superior branch to a greater extent than the inferior branch, absence of the corresponding oculomotor subnuclei in the midbrain, and variable abnormalities of the superior rectus, inferior rectus, medial rectus, inferior oblique, and levator muscles. (Refer to eye muscle and nerve anatomy to review the normal lateral eye).