Individuals with CFEOM2 share a non-classic CFEOM phenotype. Affected individuals are born with bilateral ptosis (droopy lids), with their eyes  partially or completely fixed in an outward (exotropic) position. Eye movements are severely limited or absent in all directions, and forced duction testing is positive for restriction. In addition, pupils are often small and non-reactive.

The clinical characterization and enrollment of CFEOM2 families involved much work by our collaborators in the Middle East. In total, we have identified four Saudi Arabian and one Iranian pedigree with CFEOM2. The families are consanguineous (contain interfamily marriages) and the CFEOM phenotype is inherited in an autosomal recessive fashion.

We mapped CFEOM2 to the FEOM2 locus on chromosome 11q13. This was identified using the technique of linkage analysis. After defining the critical region of the FEOM2 disease gene, we evaluated candidate genes within the FEOM2 region and in 2001 reported PHOX2A (previously known as ARIX) to be the gene mutated in this form of CFEOM. Thus far, we have identified four unique homozygous mutations in PHOX2A, two splice site mutations, one missense mutation, and one nonsense mutation.

The diagram below details the proposed pathology for CFEOM2. It shows an absence of the motoneurons in all of the oculomotor and trochlear nuclei, with corresponding absence of cranial nerves III and IV and abnormalities of the innervated muscles. (Refer to eye muscle and nerve anatomy to review the normal lateral eye.) 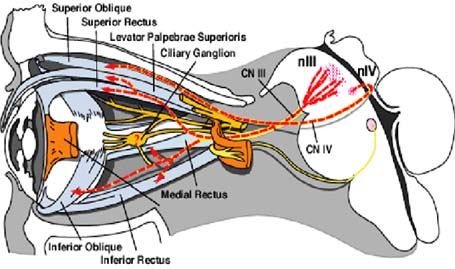 The surgical observations and examination of biopsy specimens taken at the time of strabismus surgery, as well as the results of CT and MRI scans of the brain and orbit, support our hypothesis that CFEOM2 results from maldevelopment of the entire motor division of cranial nerves III and IV.

In 2001, we identified PHOX2A as the gene mutated in CFEOM2.

PHOX2A is a homeodomain transcription factor protein has a primary role in the generation and survival of adrenergic neurons and a population of brainstem motor neurons, as well as in the determination of the noradrenergic neurotransmitter phenotype. In mice, Phox2a and its paralog Phox2b are co-expressed in the developing locus coeruleus, in parasympathetic, cranial sensory, sympathetic and enteric ganglia, in hindbrain branchiomotor and visceral motor neurons, and in midbrain nIII and nIV somatic motor nerons. Morin et al (1997) demonstrated that Phox2a -/- mice lack the oculomotor and trochlear nuclei, the locus coeruleus, parasympathetic ganglia in the head, and the superior cervical ganglion. In addition, cranial sensory ganglia that normally express Phox2a are severely affected.

Of these structures, only nIII/nIV are absent in Phox2a-/- mice but present in Phox2b-/-, indicating that nIII/nIV are the only Phox2a-dependent neurons that do not also require Phox2b for normal development.

The absence of nIII/nIV in the Phox2a-/- mice corresponds to the predicted neuropathology of CFEOM2, as the absence of these nuceli would account for the bilateral ptosis and restrictive exotropia in these affected individuals. We predict that CFEOM2 results from aberrant development of these motor nuclei [Nakano et al 2001].