Evolution of self-reactive B cells

Using a novel mixed bone marrow lupus model, we found that self-reactive B cells can escape tolerance and form germinal centers much like those specific for foreign antigen. Remarkably, the self-reactive B cells not only undergo affinity maturation but differentiate into antibody-producing cells and memory cells. Importantly, these spontaneous germinal centers promote epitope spreading leading to formation of a wide range of autoantibodies- a phenomenon referred to as epitope spreading. Current studies focus on understanding the role of self-reactive T follicular helper and T regulatory cells in promoting epitope spreading and understanding the transcriptional profiles of the self-reactive memory B and T cells (see Degn et al Cell 2017 and Das et al Immunity 2017).

Two-dimensional representation of single cell transcriptome data from wild type B cells maturing in an autoimmune environment. WT B cells were sorted and processed for droplet based single cell RNA-sequence and VDJ repertoire analysis. The cells were grouped by their gene expression patterns. Four clusters were identified: GC Light and Dark zones, Plasma Cells and Activated/Memory B cells. 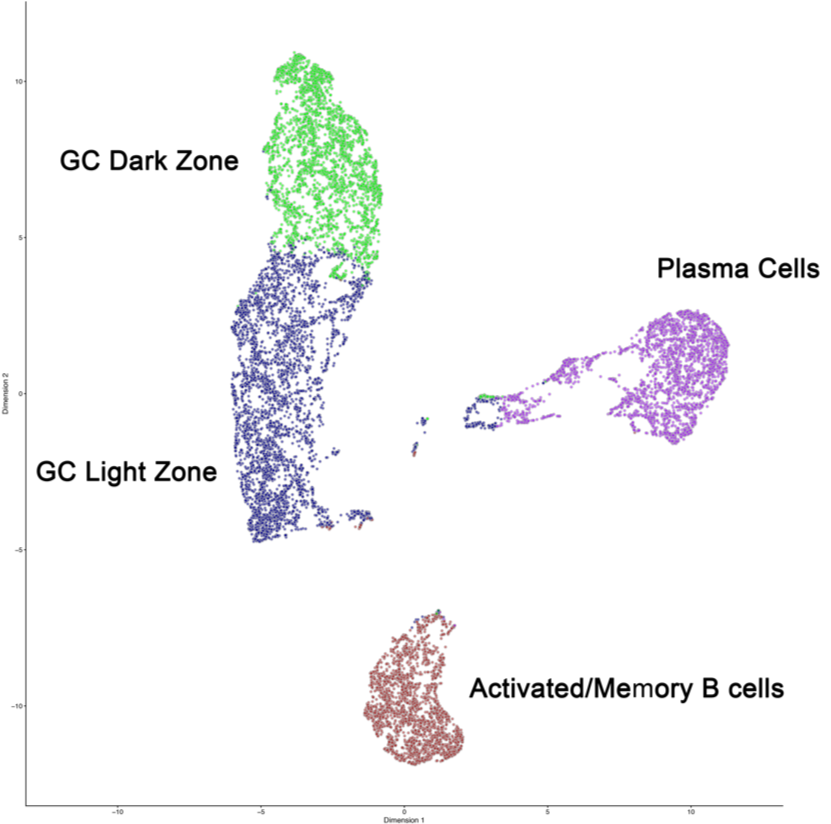 Lupus patients often develop neuropsychiatric symptoms but the physiological basis remains unknown. Using an established lupus mouse model, we found that microglia in their brains become over-activated with age and engulf synapses in regions of the brain important in cognition and learning. Current studies are focused on characterization of microglia in various lupus mouse models or mice treated with recombinant IFN-a to examine the effects on glial cells and neurons in distinct regions of the brain.

Human complement C4A as a risk factor in schizophrenia

Schizophrenia is a common neuropsychiatric disorder of no known etiology.  Using a genome-wide screen of over 26,000 schizophrenia patients, our colleagues found that disease susceptibility was associated with increased copy number of human complement C4A gene. To test whether overexpression of the hu C4A protein can mediate brain pathology or neuro-psychiatric symptoms, my lab developed BAC transgenic mice that express varying copies of human C4A and C4B alleles; or alternatively used CRISPR/Cas9 gene editing in zygotes to construct C4A- and C4B- human isotype C4 mice. Current studies are focused on determining whether too much C4A protein can lead to excess neuronal engulfment and characterizing the underlying mechanism (Sekar et al Nature 2016). 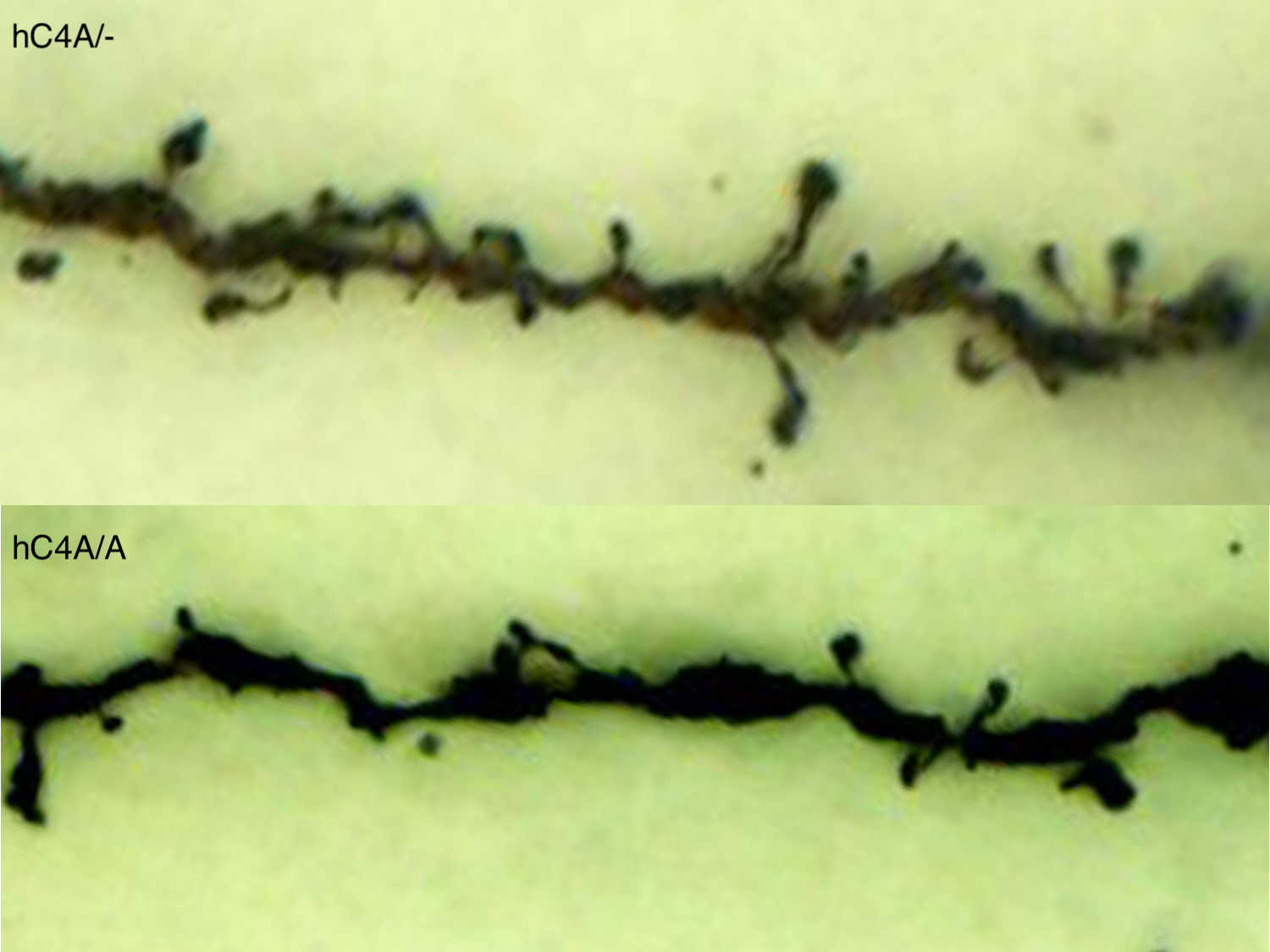 Follicular Dendritic Cells (FDC) are a stroma-derived cell population that are centrally located in the B cell follicles in lymph nodes and spleen. They are crucial during germinal center (GC) formation, a process that allows the generation of highly specific antibodies during immune reactions. We have previously shown that the complement receptor (CD21) on FDC cycles intact immune complexes (IC) from and to the plasma membrane for clonal survey by GC B cells (Heesters et al, Immunity 2013). This process allows the FDC to store antigen for weeks to months for presentation to B cells.  The Carroll lab is investigating the role of IC binding receptors on FDC and how this pathway is involved in GC dynamics to foreign and self-antigens. In particular, we would like to understand the importance of FDC in autoimmunity.  Remarkably, CD21 internalization of IC containing nucleic acid activates the TLR 7 pathway triggering NF-Kb and expression of IL-6 and interferon alpha (IFN-a) (Das et al Immunity 2017).  Current studies are testing the hypothesis that FDC expression of inflammatory cytokines alters the local environment and acts synergistically with TLR 7 to promote loss of tolerance by self-reactive B and T cells.

Follicular dendritic cells maintain B cell antigen in germinal centers through the uptake and cycling of complement- opsonized immune complexes. In autoimmunity, such as lupus, uptake of self-immune complexes by CD21 activates TLR7 leading to secretion of cytokines such as interferon alpha promoting survival and maturation of self-reactive B cells. 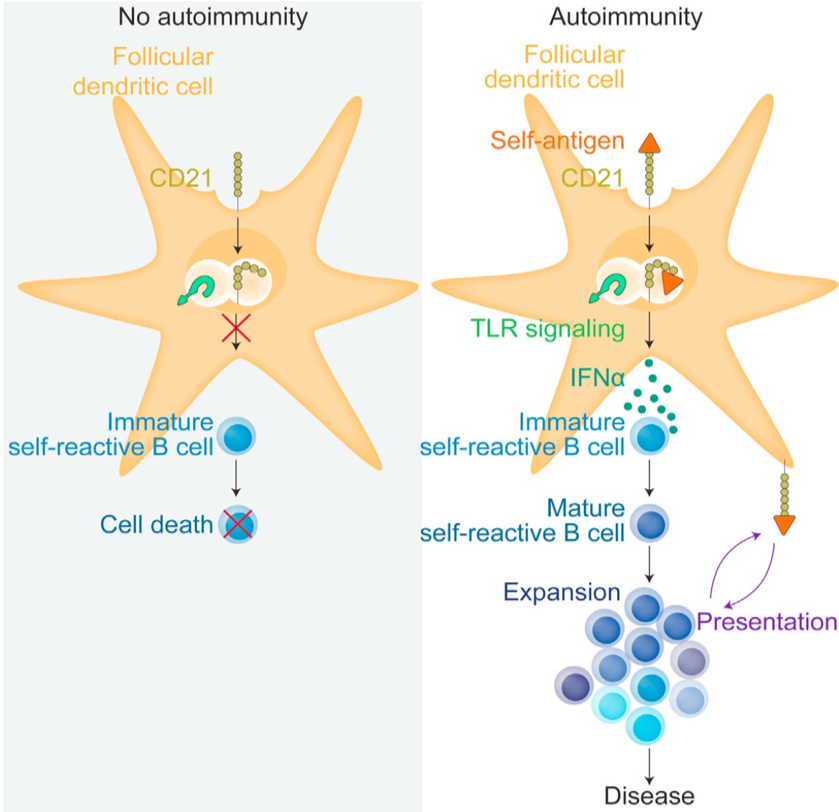 Human C4A is protective in autoimmunity

Genetic deficiency in complement C4 almost always leads to lupus-like disease in mice and humans. Unlike mice, humans express two isoforms of C4 which are greater than 99% identical but differ in their chemical binding to immune targets.  Although total deficiency in C4 is rare in humans, deficiency in either the C4A or C4B isoform is relatively common.  Strikingly, deficiency in C4A is a major risk factor for lupus suggesting its functional role differs from C4B in humans. To understand how the isoforms may differ in their protective role in lupus, we used gene editing to introduce mutations in the mouse C4 gene to generate mC4A and mC4B lines.  Comparison of the two strains in a lupus model, identified a significant reduction in autoreactive GC and memory B cells in the C4A mice which correlated with increased efficiency in clearance of apoptotic cells.  As expected, C4-def mice were the least efficient in clearance which may explain the B cell escape of follicular exclusion- a measure of negative selection.  We propose that the binding efficiency of C4 to apoptotic cells predicts escape of negative selection by self-reactive B cells and shapes the repertoire of autoreactive B cells that enter the follicles.  Current studies are comparing BCR, TCR and whole transcriptome profile of GC and memory B cells at the single cell level of mC4A, mC4B and C4-def mice. A corollary of this hypothesis is that the severity of epitope spreading ranges from C4-def >mC4B>mC4A (C4-def the most severe). 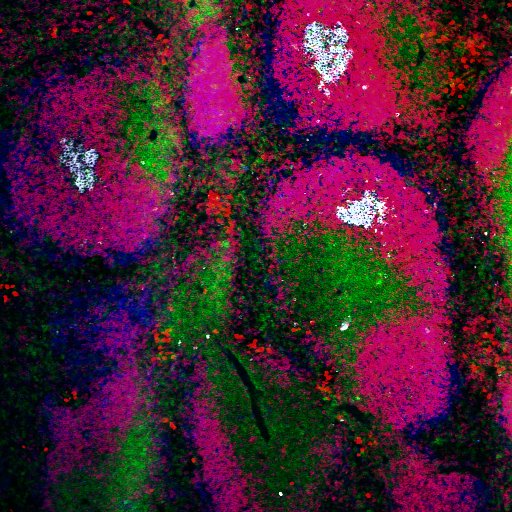