Please click on the links below to learn more about the exciting articles written about The Manton Center and its research! 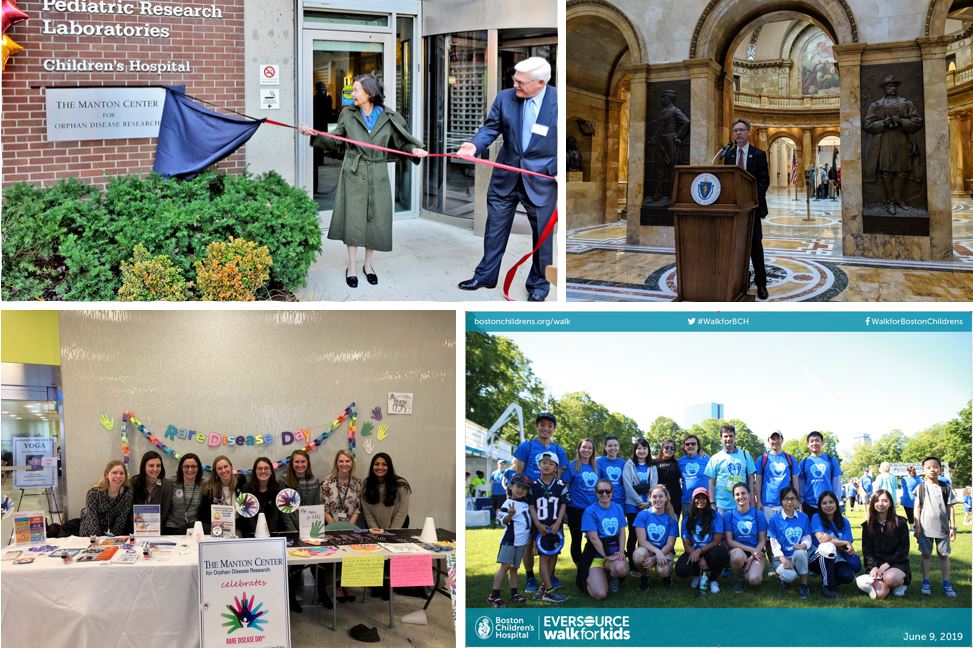 A podcast featuring Dr. Beggs that explores the role of whole-genome sequencing in rare disease diagnosis
The Manton Center Director, Dr. Alan Beggs, join colleagues from Rady Children's Hospital, Variantyx, and Psomagen to discuss the impact of genome sequencing on the diagnostic odyssey experienced by many patients with rare diseases. Listen here.

A new collaboration driving discovery at The Manton Center

The Manton Center is teaming up with Inspire, a social network for health, Pfizer Inc., and Citizen Genetics, a genetics research company, to learn more about how genetics contributes to health conditions and how improving our understanding of this underlying mechanism can lead to improved treatments. Read more here about this exciting collaboration known as Patient Forward Access to Clinical and Technological Research (PFACTR).

Newborn DNA sequencing finds actionable disease risks in nearly 10% of enrolled babies
A team led by Alan H. Beggs, PhD, and Ozge Ceyhan-Birsoy, PhD of Partners HealthCare and report the comprehensive results of whole-exome sequencing in 159 infants. Their analysis is published in the American Journal of Human Genetics.

CLARITY Undiagnosed is the second crowd-sourcing competition hosted by the Manton Center for Orphan Disease Research at Boston Children’s and the Department of Biomedical Informatics (DBMI) at Harvard Medical School. Submissions were evaluated by an independent, diverse panel of judges, including medical geneticists, computer scientists, bioinformaticians and clinical experts. Twenty-one of the original 26 teams ultimately completed the challenge.

The first annual Orphan Disease Symposium was held on November 16, 2010 in the Folkman Auditorium. The Manton Center played a role in the establishment of this symposium, with many of our Senior Scientists presenting on their role in rare disease research. Dr. Mustafa Sahin, one of the 2010 Innovation Fund recipients, will also be presenting.

Announcing Partnership with Shire
We are proud to announce a new collaboration program between Shire and Boston Children’s, which will provide funding and additional resources to support development of therapeutics for rare diseases. This collaboration will hopefully lead to new insights and advances for the individuals with orphan disease we serve.

Investigators who are interested in submitting a project can complete the 2 page preproposal application due January 21st. Questions about submissions can be directed to Nurjana Bachman in TIDO.

Announcing Sequencing Pilot
This week, Boston's Children's Hospital announced the launch of the new sequencing pilot project for clinical or research use. This initiative will allow for Children's Investigators with approved IRB protocols to submit samples for whole genome sequencing or exome sequencing. Please see the application for more details. Contact Catherine Brownstein with questions.

First Human Embryonic Stem Cell Lines Approved
The NIH press release about the 13 new lines of human embyonic stem cells which have been approved for use in NIH-funded research. Eleven of the 13 cell lines were created in the Daley laboratory.

When Milk Threatens Babies
The Boston Globe discusses the relevance of orphan disease research by highlighting Dr. Gerard T. Berry's research and the comprehensive galactosemia conference co-sponsored by The Manton Center in August, 2009.

Rules Will Allow Financing for Old Stem Cell Lines
Dr. George Daley talks about the significance of older stem cell lines being eligible for federally financed research under the Obama administration in The New York Times.

Louis Kunkel, PhD, chief of the Division of Genetics and a Howard Hughes Medical Investigator, was recently awarded the $250,000 March of Dimes Prize in Developmental Biology. Lou identified the gene and protein dystrophin, which is mutated in boys with Duchenne/Becker muscular dystrophy. The award has been awarded annually since 1996 to investigators whose research has profoundly advanced the science that underlies the understanding of birth defects.

George Daley, MD, PhD, associate chief and director of Pediatric Stem Cell Transplantation, was recently awarded the E. Mead Johnson Award from the American Pediatric Society and Society for Pediatric Research. The award, given since 1939, honors clinical and laboratory research achievements in pediatrics and is considered the most prestigious award in pediatric research.

Back to the Future
Dr. Luigi Notarangelo and Dr. George Daley are featured in a Vector article discussing the clinical and research applications of stem cells.

Research Named Number 1 of 2008
Research by Dr. George Daley was included among The Boston Globe's "Best of 2008" breakthroughs.